Spooks and Goblins and Haunts, Oh, My! 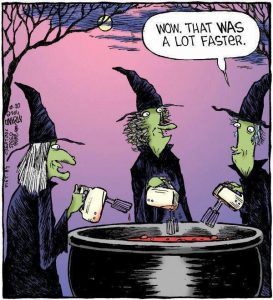 The world of the unknown and unexplained have attracted people for centuries. Halloween fascinates us and has its roots in Celtic history with the festival of Samhain, when people would light bonfires and wear costumes to ward off ghosts. This was concurrent with the Christian celebration of All Saints Day, the day after Halloween also known as All Hallows Day. So Hallow’s Eve became Halloween.

According to Celtic Mythology, the veil between the Otherworld and ours thins during Samhain, making it easier for spirits and the souls of the dead to return. People would offer food to get on the good side of these spirits.

And so the tradition of Halloween was established and evolved into tricks or treats.

Halloween brings out the ghosts and goblins. Maybe you’re feeling haunted by past misfortunes or burdened with problems that seem too difficult to deal with, or are haunted by the loss of loved ones.

Restimulation can pop up at the most inopportune time, like a skeleton rattling around in the closet. You might be aware of it but don’t want to open the door and invite it in.

Behind every trick of the bank, there is an opportunity to treat yourself, your friends and family to the most wonderful wins by tackling those demons and ghouls with Scientology® auditing.